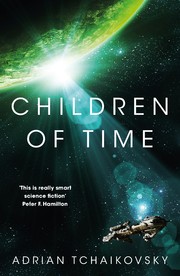 The last remnants of the human race left a dying Earth, desperate to find a new home. Following their ancestor's star maps, they discovered the greatest treasure of a past age - a world terraformed and prepared for human life. But all is not right in this new Eden. The planet is not waiting for them, pristine and unoccupied. New monsters have turned it from a refuge into mankind's worst nightmare. Now two civilisations are on a collision course and must fight to survive. As the fate of humanity hangs in the balance, who are the true heirs of this new Earth?

What a great book. I'm so happy I went back to it, and I'm looking forward to starting the second book in the trilogy, probably in the new year.

I would highly recommend this to any and all sci fi fans.

Incredible! "The smartest evolutionary world-building you'll ever read", indeed! I was not expecting that wonderful ending. I was bracing myself for an ending I would not like, but I was wrong!

I can't wait to start the second book.

Amazing. I found the civilization on the terraformed planet to be completely fascinating. I haven’t read or watched a lot of sci-fi, but I remember stories where the humans were the heroes and had to fight alien invaders that would come and try to annihilate them. In this novel it’s pretty much the opposite: the humans are the invaders, and I was rooting for the "other" civilization. The end was also very satisfyingly: somehow surprising, yet consistent with what happened before.