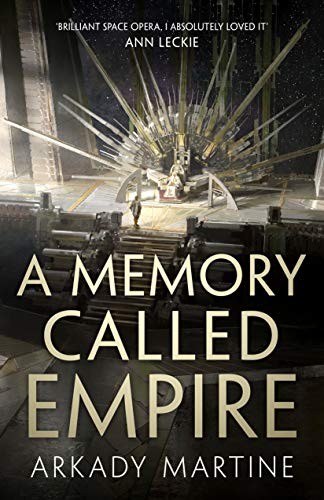 Ambassador Mahit Dzmare arrives in the center of the multi-system Teixcalaanli Empire only to discover that her predecessor, the previous ambassador from their small but fiercely independent mining Station, has died. But no one will admit that his death wasn't an accident—or that Mahit might be next to die, during a time of political instability in the highest echelons of the imperial court.

Now, Mahit must discover who is behind the murder, rescue herself, and save her Station from Teixcalaan's unceasing expansion—all while navigating an alien culture that is all too seductive, engaging in intrigues of her own, and hiding a deadly technological secret—one that might spell the end of her Station and her way of life—or rescue it from annihilation.

I quite enjoyed this book! A fun narrative about a young diplomat from a remote space station who finds herself appointed ambassador to a Big Evil Empire. The book takes place in the imperial capital and thematically does the whole "man, giant empires really do suck a lot" thing, and does it well. The one Big Weird Sci Fi idea (basically multiple people cohabiting in one brain) is pretty cool and also the author manages to portray it without being offensive to people with, say, dissociative identity disorder. I feel like it dragged a bit at the end and sort of fizzled out, and ultimately I found myself reading a book set on the main character's home space station than at the heart of this big scary empire. I live in a big scary empire so it all seemed pretty standard to me. Still, totally recommend the read.